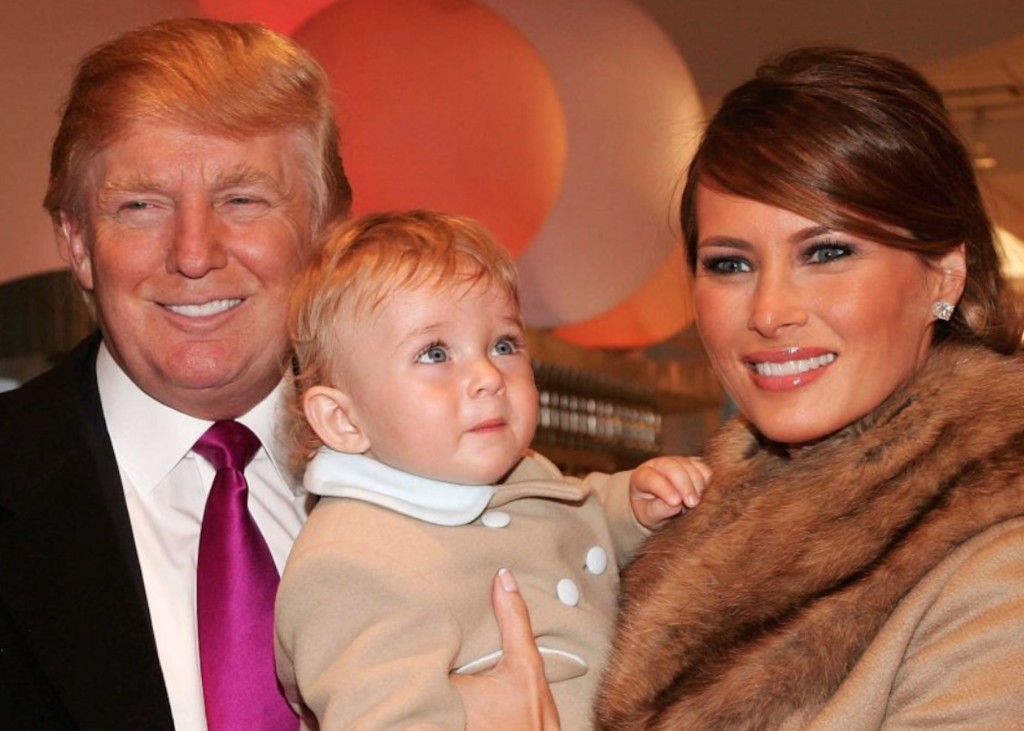 Donald Trump, his wife Melania, and their grandson.

*I did it. Yesterday afternoon I decided to jump on the political blogging bandwagon. I wish I hadn’t, but I lost my self-control for a moment and my computer just happened to be nearby.

Trust me when I say, it would be easy to NOT show you what I wrote. But for the sake of confession, and for the sake of you possibly being able to find yourself in my words and unearth your own fears, self-RIGHTness, lack of humility, or co-dependent need to set others straight, I am sharing it.

They’re not terrible words. They’re not fearful words telling you “the end is nigh” come November of 2016. But they are reactionary. The words of a co-dependent; I need YOU to be better so I can be better.

It’s a disease, really. One I still have. One I’m working on.

So read on knowing that what follows is not a word from God. It’s a word from me…co-dependent me. It’s me judging you for judging me.

First my humanity. Then something divine.

PART ONE: HUMANITY (Here’s what I wrote yesterday afternoon)

Love They Neighbor, Unless He’s An Idiot
When Jesus is Neighbors With Donald Trump

I can’t believe I’m wading into these waters, because I’m sure you’re just as tired of it as I am.

I’m not endorsing a presidential candidate, because this isn’t about Trump or Kasich or Hillary or Ben or Rubio or Sanders. It’s about Jesus and his call to love our neighbors.

First and foremost, I’ll be putting ME in my place, not you. Although I’d be lying if I said I haven’t been a little irritated by all the hoopla being posted on Facebook, along with the red-faced, vein-popping pictures of Trump that just won’t go away.

But it’s getting ugly out there. Hateful, I’d say. Easy to hide behind our computers and accuse, hurl insults, be witty, sarcastic, and quite frankly…

If you’re a believer in Jesus, if you’ve said, I want to follow his ways, you’ve been called to more – to behave differently. And so have I.

Looking at this world from a spiritual perspective, here is how things shake out for me. I suppose you could say…these are my politics.

I can’t for a moment believe that a political party or candidate will cure much of anything. At best, I believe we are choosing between the lesser of two evils. Expecting a political party to Make America Great! is like expecting a bologna sandwich to satisfy customers at Ruth’s Chris Steakhouse.

It’s not going to happen.

Any manmade system cannot and WILL NOT solve our deeper problem. Simply put, a kingdom of this world will never reveal the kingdom of God.

You may have noticed that the kingdoms of this world always use control and power OVER others, while the kingdom of God serves. It becomes less so others can be more. Power through humility not hierarchy.

After reading Myth of a Christian Nation by Greg Boyd, I came to the conclusion that when voting, I’m actually casting a ballot for the lesser of two evils, which I find relieving because I’m no longer expecting a candidate to be the answer. As a Christian, I believe the way Jesus lived and died is the answer.

Many of us are currently being driven by fear. We’re afraid people will be executed, while Trump becomes History’s next insane dictator. So we quote our stats about what happened in Nazi Germany and accuse people who seem to be less uninvolved (or just less vocal) of being just as guilty as Hitler himself.

Do you feel the control?

I’ll accuse you of being silent, and your silence as the cause of our trouble; maybe THEN you’ll do what I want.

It’s a lot of fear mongering and my silence on the issue isn’t a show of support for Trump, even if you say it is.

I can pray. I can write this article. I can ask you to think bigger. I can remind you that there’s no fear in love and ask you to reconsider before posting insulting and fear filled posts on Facebook and Twitter. And I can only speak for myself here, but those posts have changed me exactly zero percent.

That said, I will not be casting a vote for Trump because I simply do not believe in his politics. But he IS my brother. And I’m no better than him. Not one bit. I’m just as guilty of hurting people. And more often than I’d like to admit, I’m just as blind to my own character defects.

Did I need a wake-up call when I was ignoring how I was hurting others? Yes I did. But I needed that wake-up call to come from those who LOVED me. I would’ve never heard it from someone who SAID they loved me but showed nothing of the sort. And I would’ve never changed my mind because you posted a meme on my Facebook wall that said, “We shall over comb.”

It’s odd (at least to me) to see posts about how awful The Donald is, followed by prayers to be kind, to understand others, to accept them.

Maybe twice a decade would I throw the words “What would Jesus do?” at a situation, because most of the time those words carry the intent to shame. And shame keeps us stuck. But this is one of those times when it seems appropriate to ask.

Seriously. What WOULD Jesus do?

Instead, I imagine him saying…

This doesn’t give you a free pass to do nothing. NO! You are to keep on loving every person I put in your path.

Forget the fear. Find the love instead.

PART TWO: DIVINE (Here’s what I realized after giving it a little more thought)

*The words you just read, I’m not proud of them, but I’m not ashamed of them either. I just recognize them for what they are; the words of man who wants to fix it.

Listen, fear has taken over the news and social media. Even our spiritual leaders are feeling the pressure to fix things and have begun using their platforms to request that we protest in the same way that they are.

Most of the words I couldn’t make out, but it wouldn’t have made a difference if I could have. Because regardless of the words, I heard God calling out to my spirit, soothing my worries and providing answers to the questions I’ve been asking – perhaps that you’ve been asking too.

God’s answers in this song, aren’t answers at all, but groans. Swift and beautiful vocal improvisations drowning out the sirens that keep telling me to be alarmed, to worry, to get ready for disaster.

Improvisations, maybe because this what God does when the time calls for it.

Without even a worry he sends peace out from the heavens, drifting toward this blue-green orb, which will always fit within the palm of his hand – where every last one of us is. Even The Donald. Even Hillary.

Watch the people around her as she sings. They hear God too. And hearing him makes them laugh, wave, sigh, call out, and nod their heads. There’s peace in that room. I can feel it straight through my computer screen.

Can you hear it? I hope you can. I tell ya, it’s as plain as day to me. If you can’t, listen closer. And then keep on listening until you hear God telling you it’s going to be okay.

That even if it’s NOT okay, it’s going to be okay.

*HERE is the VIDEO: