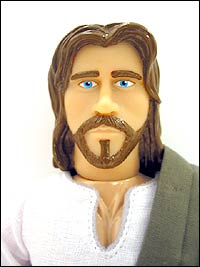 *Afterword from the book: “The Blind Writer: Finding Faith Beyond Our Christian Subculture” by: Matt Bays

We have a bookstore at our church. It’s not a far cry from what you’d expect in a Family Christian Store. In fact, it’s exactly like that, only I know the people who work at our bookstore and they serve up great coffee.

I’ve always wondered how Christian bookstores get all their stuff. Apparently, merchants come in with stuff they’d like to sell, (t-shirts, mints, greeting cards, coffee cups, scripture pictures) and they show their merchandise to the manager. Together, the merchants and manager decide on what is worthy enough to make it on the shelves; what will actually sell; what will make a difference.

About two months ago, I walked into the bookstore at my church and the girl behind the counter yelled out to me, “Jesus is here!” I thought she meant me at first. She didn’t. Then she continued as bold as she’d started. “Hey Matt, did you see Jesus?”

“What are you talking about?” I grunted. Obviously, I didn’t believe her. And because I hadn’t had my coffee yet, I didn’t care.

“He’s right over there,” she says, pointing over my shoulder.

I turned around and saw a couple of men in business suits talking to another man who helps with the inventory at our bookstore. They were dressed to kill and both of them had their hair piled high on their heads – hair that only an old barber’s comb could’ve piled that high.

There was about four feet separating me and the business men. And since they’d heard Kim’s very loud, “Jesus is here!” announcement, they were looking in my direction. I felt strange; like since I was a Christian I should be interested in finding out where Jesus was, or what Kim was talking about, so I instinctively headed toward them. One of the men smiled and held up a Jesus doll that was robed, bearded and sandaled.

“Creepy,” I said. It was one of those moments where the words tumble out before you have a chance to take an oral inventory. At the time, I didn’t realize they were merchants, and I guess I assumed that anyone who had seen this doll…like ANYONE…would’ve felt the same as me; which was, “Gross! Where did that thing come from?”

So after I had called Jesus “creepy,” the guy holding him immediately said, “He speaks in three different languages; Greek, Aramaic, and English!”  This is when I realized they were serious.

I must tell you, and if you know me well, you know this is true; I’m hardly ever mean to people’s faces. I usually wait until they are quite a distance away before I disparage them. I have great restraint when I’m feeling irritated by something as irritating as the Savior of the entire world being turned into a rubber doll that will, no doubt, be expensive, and will decorate someone’s home, or perhaps be used as a “witnessing tool” for those who may need to make Barbie Jesus their Personal Lord and Savior.

But like I said, I hadn’t had my coffee yet, so all of my polish and pizzazz was dormant. “Oh,” I said.  “Hmmm,” I managed…the corners of my mouth drawn downward, head slightly cocked and nodding. My outside did not match my inside. My outside was diplomatic and controlled. My inside was feeling the same as I had felt the first time I saw “A Clockwork Orange” by: Stanley Kubric. I was…speechless. And unfortunately, my “creepy” comment, which was not able to be recanted, had brought the already somewhat tense atmosphere to a new level.

I walked away thinking, “Please God, please let the powers that be say ‘No’ to Barbie Jesus going on sale in our bookstore.” I had already imagined “20% off” tags on him, and it made me uncomfortable.  But two months later, still no sign of him in our bookstore.  So far, so good.

Though I definitely stand in judgment of anyone who would buy Barbie Jesus and find a special place to hang him up in their home, I wonder if it’s possible that I’ve somehow done the same thing. I mean, I realize I’m not wearing WWJD bracelets anymore, since all they did to make me more like Jesus was nothing. And no, I’m not one who is real into religious bumper stickers or t-shirts. But I know that I’ve still got some of the residue on me; the spiritual residue from the early days of my Christian life when I was saying things like, “Praise Jesus,” when all I really meant was “Thank you.” Or “Hallelujah,” which only meant, “I’m glad that worked out for you.” But the truth is, I don’t want Barbie Jesus on my shelf or in my heart. He’s rubber. He’s not tested one bit and he’s suffered about as much as any American Girl doll has. And that’s just not enough for me. I don’t want a doll. I don’t want something plastic and pretty. I want the real thing. I don’t want a reminder sitting on my shelf that speaks in three languages…languages that most of the world has never even heard before.

If Jesus is real, and I happen to think He is, the Barbie Jesus doll will not do one thing for me other than have me thinking Jesus is some sort of toy. Well, He’s not. He’s not a toy. He’s a Jewish man who died on a cross for His community. For me.  To emblazon His image in hard molded rubber and tiny robes doesn’t work for me. And neither does putting a fish on my car, or a cross on my neck. It’s not a bad thing, per se, but it’s not Jesus either. It’s costume jewelry. It’s costume faith. It looks like faith and beliefs, but it’s not. It’s replication. And replication is not real. Replication is imitation.