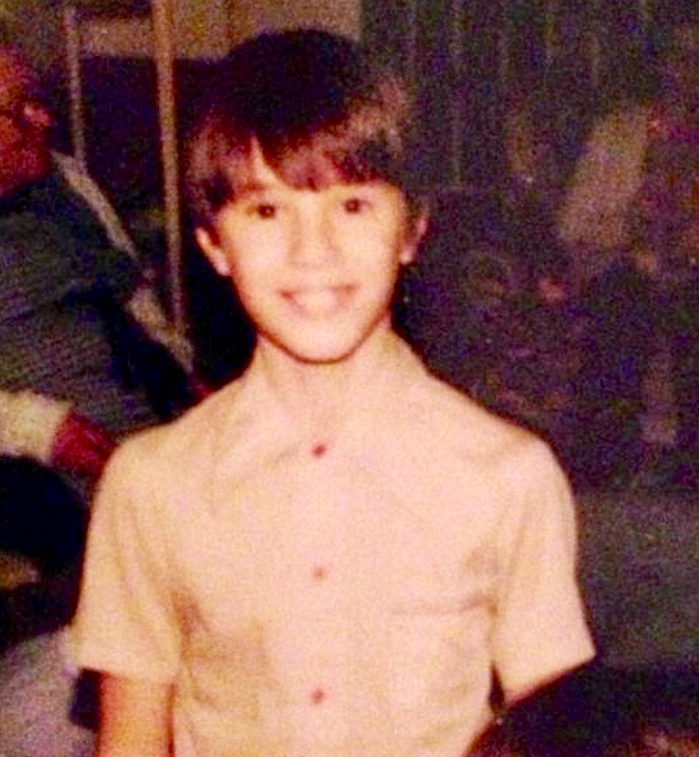 I’ve drawn pictures of Snoopy since I was in third grade. If we received a one hundred percent on a spelling test, our teacher, Miss Schroeder, would draw a Snoopy in the upper, right-hand corner of our worksheet. I was a pretty good speller, so whenever I saw a Snoopy on my paper, I would trace Miss Schroeder’s rendition and then work to perfect my own at home.

Before long, my mom caught on and Snoopy became the gift of choice for birthdays and Christmas. My favorite was a stuffed Snoopy doll with a radio in his belly. I took him to bed each night and listened to the music of the late 70’s, early 80’s until I fell asleep.

When you’re a kid, it is mostly about the sound of the song—about how we feel when we hear it. In those days, most of us never paid attention to the lyrics, so they never found their way inside us.

In 1984, I joined the junior high wrestling team. I was thirteen years old. I was a good little wrestler, which I’ve always attributed to growing up in a house where I had to fight. With so much tension in my family of origin, to release the valve on the pressure-cooker, we fought. And I was good at it. I was a good little fighter.

Along my journey, I’ve found other good little fighters. On January 20th, 2015, I came across the blog, “In Others’ Words” by Laura Parrott Perry. I remember the feeling as I read; the sacred space of authenticity that isn’t trying to be well-mannered. The heartbreak of a demanding story, told with a measure of levity.

I read Laura’s article twice, shared it on my feed, and left a comment on her post.

After that, I read everything she wrote. I was drawn in by her unique writing style that acknowledged the very real darkness of this world (not minimizing a single thing) but never once came off as terminal. There was always hope. Always lightness and joy. But also, always a sincere reverence for the places we don’t like to talk about. Simply put, Laura made me feel like I could tell the truth and not die.

Since then, we’ve become friends. Like, actual fiends. And I couldn’t be more grateful. Because this little fighter needed a companion on the journey, and Laura has been that for me. Her ability to stand in her truth, has helped me stand further into mine. Because there was more to my story, so much that still hadn’t been told.

You see, after my wrestling practices, we would hit the showers; something that was equally exciting and shameful for me. With all its naked boys, the locker room was the place in the world that I most wanted to be. And yet, it was also a place of deep and impenetrable shame.

It seemed as if the other boys had been born in the locker room—as if the locker room was the womb where they’d been knit together. They had conversations about wrestling while soaping under their arms in the gang shower. They laughed at the dirty jokes teenage boys make while snapping towels at each other. It was a scene from High School Musical that had been choreographed in my absence. The whole wrestling team walked through their steps effortlessly, while I was an understudy who hadn’t been prepped for the performance. I was a foreigner among the indigenous male adolescents of that locker room. And if I didn’t belong there, I didn’t belong anywhere.

I had already learned what it was to keep a secret. But at Northwood Junior High School, I learned that who I was, was the real secret to be kept.

In She Wrote It Down, Laura tells us, “We build our lives out of story and when we decide those stories are unspeakable, we build prisons out of our secrets.”

Fast-forward three and a half decades, and I’m living proof that Laura is (so painfully) right.

At this very moment, I’m sitting in an empty house. It’s my new beginning that is filled with fear and what-ifs and what-the-hell-just-happeneds. I am alone and afraid. I am starting over. A new chapter or new story; I’m not sure which.

The last eleven months have altered my life in ways I never saw coming. I’m divorced from a woman I have loved for over two decades. I’ve come out as a gay man. My publisher put my book out of print because of my sexuality. My family has fallen apart and is desperately trying to rebuild.

When Laura asked me to write this foreword, I was certain it wasn’t a good idea. I was convinced it had the potential of being the worst foreword to a book, ever; because I’ve got nothing to say about living an honest life, or holding it together.

But then I began reading She Wrote It Down, and Laura told me I didn’t have to know something fool-proof about life. She told me I was allowed to keep secrets, so long as those secrets found a writing-table within me where they could begin the arduous process of turning themselves into stories. For the good of myself…and eventually, for the good of humankind.

I am impossibly grateful for this book. I laughed so hard while reading, only to have my eyes fill with tears fifteen seconds later.

And mystically, Laura was there the whole time. Because She Wrote It Down isn’t a book, really, so much as a companion. She was with me in my living room, in the laundry mat, sitting in a cold garage because I needed to finish this one last chapter.

In it, she never tells us “how to” …because haven’t we had enough of that already? Instead, she tells us…

In eighth grade, I only wish someone had seen me. Because I was standing on very timid legs at the precipice of manhood, but I didn’t know how to jump. And I needed help.

I had wrestled myself all the way to a city championship match. I was a strong boy who knew how to fight. But at night, I was still sleeping with stuffed animals.

My favorite song in those days was We Belong, by Pat Benatar. Maybe it was her effortless vocals. Maybe it was the children’s choir at the end of the song.

Or maybe it was the lyrics.

I’m standing at the door of my old bedroom on Crestview Drive. I’m looking across the room at the abused boy laying in his bed, wondering who the hell he is. Gay? Straight? A fraud of a boy? I tip toe toward him until I’m standing over his 92lb frame. For a moment, I watch him sleep, hugging the neck of a toy he has long outgrown.

I hear the song rising from his belly, and this time, I let the lyrics wash over me. They are finding their way inside.

I kneel down next to him. I want to sing his favorite song to him. Because I know if I do, that one day he will find the strength to tell his secrets, to move forward…

to write it down.

I brush his hair back and smile. He is beautiful. Worth it. He is not alone. His chest floats up and down as I steal a breath of air from the past and whisper these perfect words into his ear.

My friends, so many of us are longing for things to be made right. Longing to be whole. And maybe in this collective longing, this is how we BE-long. For we are no longer secret keepers, hiding away all by ourselves. Not at all. We are storytellers. And we are writing it down.

Thank you, Laura. You wrote it down. And we believe you…that we are not alone. None of us.

*Do yourself (or someone you love) a big, wonderful, heart-healing favor…and pick up Laura Parrott Perry’s first book, She Wrote It Down: How a Secret-Keeper Became a Storyteller. 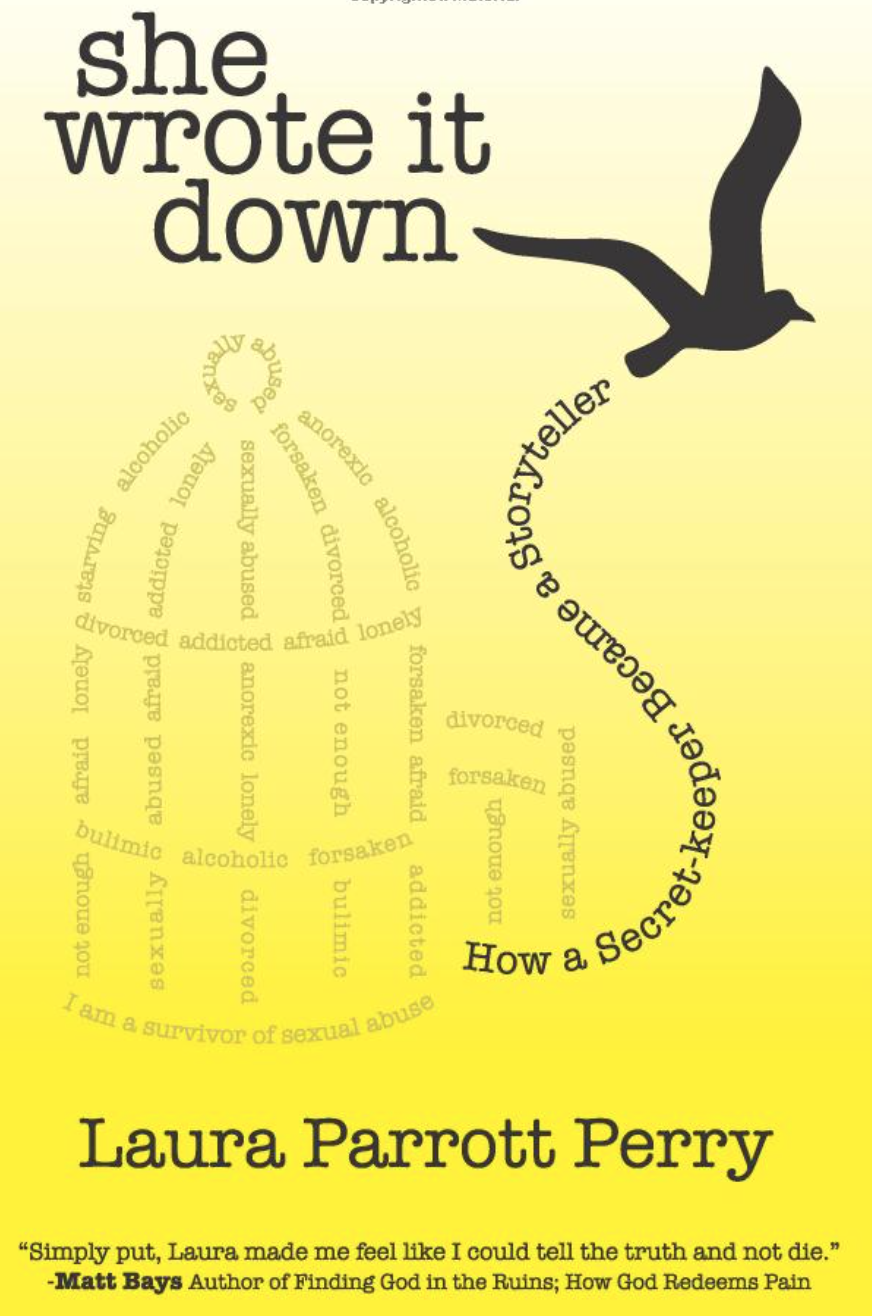