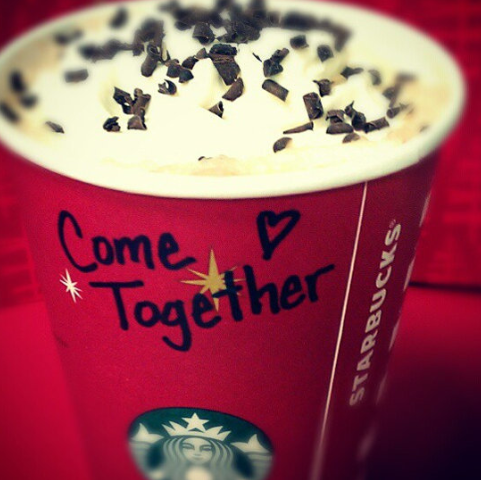 In the early morning of each day I go to Starbucks to write.  I’ve noticed something about me lately as I sit and do my writing.  While I should only be grateful that I’m sitting in a Starbucks drinking coffee and writing – and that I’m able to actually afford this decadent lifestyle I’ve grown accustomed to (it’s become like a house payment)…I realized just this morning that I sit and listen to the Barista call out orders and make judgments about the people who have ordered these unseemly drinks.  If I hear the words “three pump” followed by anything, I roll my eyes.  And if I hear the words, “three pump this, two pump that, TALL frappusugar-o, with whip, butter, and gravy” I condescend….oh how I condescend.

The other problem I have is that I bend the rules for women.  If a woman gets her drink “with whip” and sprinkles and it costs what an extra value meal at McDonald’s costs (not even gonna go there) I’m much more likely to cut her a little slack.  But if a guy gets the same thing, and I watch him open the lid and eat the whipped cream off the top, I imagine that he has probably bought up tickets for the Ellen show – and he’s gonna dance.  Somehow it has become my expectation that men should drink real coffee only, and if they are going to drink decaf, they should get it from the Sanka drip coffee maker that’s set up in the break room.  And yes, I realize that I’ve stereo-typed myself into a corner as I sit here in my skinny jeans and white belt.

I’m open minded.  Really I am.  I’ve told myself this for a long time, but the truth is, I’m not always.  Some people have chosen not to be open minded and they’re proud of it.  But the truth is, if you’re not, you’re limiting good interaction with others and are in a state of steady growth decline.  You can’t remain close minded and continue to grow unless it’s at a snail’s pace.

Open mindedness doesn’t mean you agree.  It means you love, despite.  And we could all use a little more love.

Liberals hate conservatives…well, you know what I mean.  They “defriend” them from their Facebook friend list.  And conservatives post the most slanderous things about Obama on the internet and feel justified, hence causing their liberal friends to “defriend” them because those appalling accusations and videos and articles are only stated in a spirit of awful, not in a spirit of love.  And the conservatives are cool with being defriended by their liberal friends (if they have any) because they know that the liberals just can’t handle the truth.  And the liberals turn up their noses at just how closed minded the conservatives are, but are themselves closed minded because anyone who does not hold to a belief they themselves align with, gets looked down on, or merely put up with, or…defriended.

In the words of my Grandma Matney – Matthew, don’t be ugly.

I’m not innocent.  Few of us (if any) are.  That’s the catch. If you want to be better, admitting you have a problem is step one.  But if you’re perfectly content to sit by judging people for eating the whipped cream off of their Mocha Valencia Carmel Frap Ten-Pump Hazelnut Pumpkin Spice Macchiato with a side of fries, then be my guest.  But know that this trap of “I’m right and they’re so so wrong” from either side is a growth stunter.

It doesn’t mean that I have to be close friends with those who differ from me politically or spiritually if they are disrespectful or mean.  I don’t.  But there are so many good people out there who don’t think what I think, and I have found them to be stellar individuals who have arrived at their conclusions in life only after putting in a lot of time reasoning with God, or thinking about how they really believe things should be, or after having had so many different experiences that I may have never had.  And I respect them – and if I don’t, I’m consistently working to.

I’m not a political guy.  You’ll rarely (or never) see a status update from me that esteems a candidate for political office or that vouches for one side or the other.  That’s because I don’t believe that the answers we are after – to bring healing and love to the world, to create lasting peace – will ever come from a kingdom in America or anywhere else on this planet.  My belief is that only God can bring peace and that he does it NEVER by powering over or using governments of ANY kind, but always by serving – washing feet, putting swords away, healing people, feeding them, lifting them up, and if all else fails, dying for them.  To me, that’s a whole lot harder than voting for someone or updating my FB status with a band aid solution that won’t make it through recess.

You may not feel that way.  I’ll be good to you anyhow.  Even if you start the day out with dessert in a cup at 6:30am.

I literally just watched a man pour so much sugar into his coffee cup at the fixin’s bar that he had to pour coffee out of his cup twice to fit it all in.  Wow.  Gotta be a demublican.  God love him.