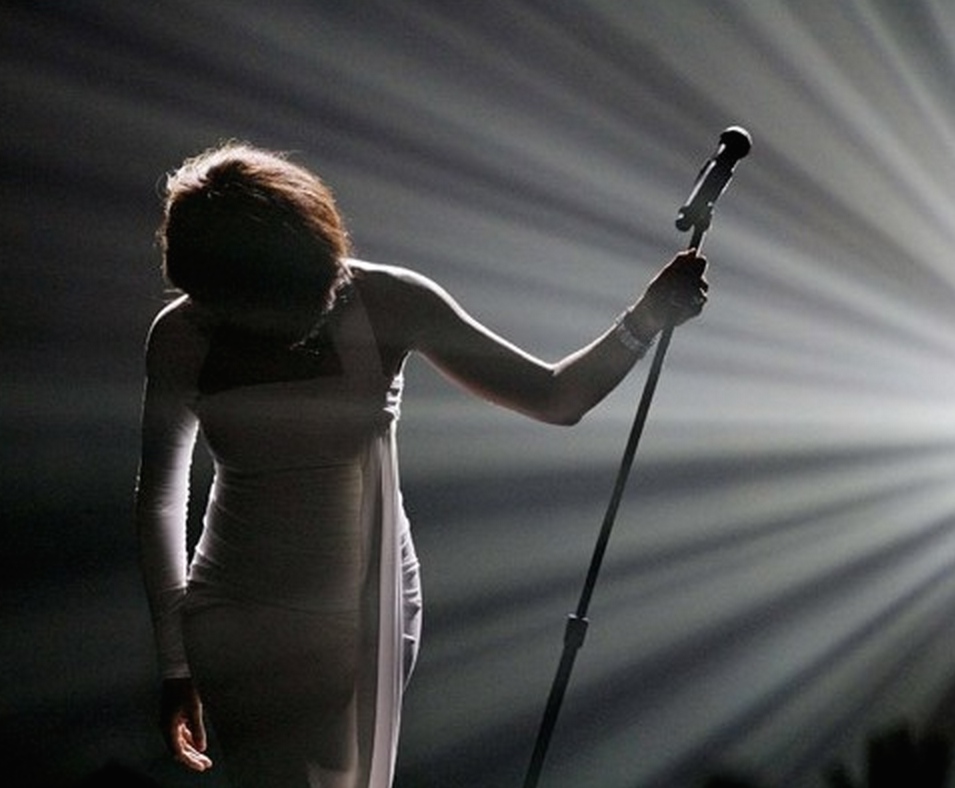 This morning I listened to Whitney Houston sing the words:

Her voice haunts me as I listen. It is older, tired and worn. I am a singer so I can’t help but investigate the journey of her once powerful voice that once needed nothing of studio magic, but in her final days had come to rely on tuners and lowered keys in order to deliver what she had been capable of before life put her in a chokehold.

Her broken voice, a side effect of drug abuse, is a metaphor for her life. She was tired, and with the strain and pace she kept, just wasn’t able to last the duration of the entire performance here on planet earth.

Two and a half years after singing “…my faith kept me alive” on what would become her final studio album, Whitney Houston was gone.

“I picked myself back up…” she told her fans, and I believe she meant it. But in every interview about her recovery she was like a little girl…hurting, lying, overestimating her efforts. Leading us (and herself) to believe her charisma was faith.

She was not built to break, that much is true. But she did break…and fatally so. The first line in this beautiful ballad of hope says it all:

“I lost touch with my soul.”

I’ve seen it many times – people with charismatic personalities who live life so big, but when it’s time to get small, they can’t seem to get on their knees and ask Something Bigger for help. I don’t know this because I’m a professional of some sort, unless we’re talking about a professional at deceiving myself and others, or a professional at ignoring the symptoms of my sickness, or at being blind, scared to face my pain, afraid I wouldn’t be able to overcome.

Since her death, we’ve learned that Whitney only had short stretches of sobriety once she began using. The last time I saw her was with Oprah, in a two-day interview. I watched with absolute focus and sat in prayer and hope for her recovery. But in every word that came from her mouth I heard only lies – lies created in her head, not her heart – lies she allowed herself to believe. I sensed the insecurity and addiction hidden behind what looked like a strong woman of faith bearing witness to a time of testing we were told had led her to personal victory. But Whitney Houston was a liar. Well it takes one to know one. And I seem to know them all.

Richard Rohr contends that addiction is not what we once thought – not big, bumbling and easy to spot – but instead is something hidden. He says we are all addicted to something, even if it’s only to our own way of doing things – our own way of thinking.

I was addicted to alcohol.

You may not be addicted to alcohol but perhaps to control – to your own way of thinking or doing things that will not allow you to reach out for help.

These “minor addictions” that are not crack, sex, or alcohol…these HIDDEN addictions are sometimes the worst. Because it’s easier to talk ourselves out of believing they are actually addictions and controlling our lives. It’s easier to call an addiction to control an “issue” when it is far beyond “issue status” – when it is, in fact, driving every moment of your life.

You may wonder why life is not improving for you. (Not financially or anything material here…I’m talking sense of self, a manageable life, peace.) And you may honestly be considering for the first time that control, food, shopping, exercise (all forms of control) could be what are keeping you in the repetitious cycle that makes life seem long…meaningless…hopeless. That consideration is most likely coming from an honest place – from a place of wisdom. And I believe Miss Whitney had those same considerations, but in the end testified to something which just wasn’t true.

“I’m better,” she told us, and she wanted to be better. But sadly, she wasn’t. And her denial was terminal.

Control won’t kill you…physically. But it will kill so many moments of your life, your marriage, your relationships. (It already has, hasn’t it?) I hope you know it won’t be fixed by reading a book. It won’t be fixed by going to church. It won’t go away by reading this post and nodding your head along. It won’t dissipate if you leave your husband, wife, kids, job. Instead, it will follow you. It always does. Because it’s IN you.

Listen, you already know. You don’t need one more conversation about it. You just need to do it. Get to a counselor. Go to a 12-step or Al-Anon meeting, and go to them regularly. There are “Celebrate Recovery” programs all over the country (at Trader’s Point Christian church here in Hamilton County. Google it. And then go. There is also a recovery program at Grace Church, 146th street in Noblesville, called The 180 Exchange.) These types of meetings are not just for the crackhead or alcoholic anymore, but for the “issue” addict as well.

A year before I stopped drinking my mentor told me he wouldn’t talk to me about alcohol (or my dysfunctional relationship with it) anymore. I thought he was a pig for cutting me off with all the soul searching I was doing. “Look, I’ve told you all I know about it, Matt. It’s time for you to either sh*t or get off the pot.”

What angered me most was being treated as if I were all “victimy.” And listen…I HATE that.

“Well, maybe you are being victimy,” he told me. “I think you know what to do, Matt. You just don’t like it. And anyway, we’ve talked about this for too long already. I’ll still be your friend, but don’t talk to me about your addiction until you make a valiant effort to stop.”

It was an entire year after that conversation before I stepped up to do anything about it. Know why? Because he was right. I didn’t want to stop.

I moved that year, expecting a geographical cure. “It won’t be as stressful at the new digs,” I told myself. And I was right. But I kept drinking just the same. Because my problem was internal, and you can’t fix an internal problem with an external solution.

I’ve probably spent $10,000 in counseling since the day I quit drinking. (Although I’m sure my personal prohibition has financially balanced things out by now.) I threw myself into recovery wholeheartedly and life as I knew it drastically changed. In fact, my kids will have a different story than they would’ve simply because, by the grace of God, I said, “HELP!”

I’m in the midst of painful circumstances these days. My sister has stage four cancer and I love her more than you can imagine – more than I can imagine. She hasn’t been healed yet (as many of you have been praying…don’t stop by the way.) So life is not easy right now. But do I want to drink?

Is life perfect? Hardly. Do Heather and I fight? Yep. But not like we used to. Do I get stuck in life and not know my head from my butt? Sure do. And guess what I do when that happens? I go see Doug the Counselor. I’ve had two appointments in the last two weeks. Costs me some money and stretches our budget. Totally worth it.

I’m leaving you with three quick thoughts cuz this is getting long. Oh, and if you are one of the stubborn who are still reading, you’ve GOT to be an addict. (A little addiction humor never hurt anyone.)

1. “Whatever it takes.” It’s an AA slogan. It means, excuses are excuses. It means, figure it out. It means you probably need to stop saying, “I don’t have the money for counseling” or “I can’t find the time to get to Celebrate Recovery, The 180 Exchange, an open 12-step or Al-Anon meeting.” The simple truth: Who does? Do it anyway. If my sister can get on a treadmill 4 times a week and run 2-3 miles with stage four cancer…for real? You can figure out how to make it work. “Whatever it takes” simply means nothing will stand in the way of your recovery. Like…nothing. It is your number one priority.

2. You can’t do it alone. You will try, and may even have some success, but eventually you will stop. My dad had twelve years of sobriety in (not outing him here…he would tell you himself). But he did it all outside of meetings – all outside of accountability. He wasn’t doing life with anyone who understood his addiction and we all need company, don’t we? He white knuckled it for TWELVE YEARS. But he hadn’t replaced that thing he was using to cope (alcohol) with something else. And you MUST replace what you’re using (control, drugs, work) with something healthy (meetings, counseling, etc.) So eventually he fell of the wagon, and when he did, he went BIG. For the next five years he was a goner. He picked up right where he left off. But he’s sober again for nine years, only this time he’s going to meetings. Want to know how many per week? Six or seven Every. Single. Week. He finally understands “Whatever it takes.” Meetings everyday is what it takes for him to remain sober, so that’s what he does. So proud of him.

3. Brene Brown says, “Speak the truth even if your voice shakes.” This is easier said than done. Trust me, I get it. The fear I carried of people finding out their pastor was an alcoholic…well…let’s just say it kept me up at night. It kept me hiding, stuck, drunk, and broken. It is never God’s plan that we hide. “You are only as sick as your secrets.” It’s so true. So tell a safe person. Go to your pastor or counselor and tell them what is going on, even if your voice shakes. And by the way, don’t expect “the telling” to be easy. It won’t be. It’s not supposed to be. Do it anyway.

In the last line of this beautiful song, Whitney Houston’s voice calling out to us from the grave. It is so tenderly delivered as she sings almost in a whisper…

“I got to know my own strength.”

For her these words would only be true in another place. Because Whitney didn’t do the work, or couldn’t, I’m honestly not sure how it pans out for everyone. But she is gone, just the same. And I believe her early death most likely could’ve been prevented just like your pain, your unrest, your hopelessness, your ambivalence with life, and…

So do the work. Honestly. Isn’t it time?