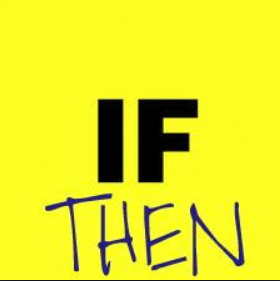 An “if-then” statement is a conditional sentence that contains two clauses, the main clause and the dependent clause.  “If the bicycle was slowing down while coming down a hill, then the bike must have had brakes,” is an example of an if-then statement you’d most likely find in a grammar book.  “If you ate the rest of the ice cream in the refrigerator, then you’re grounded forever,” is an example an if-then statement you’d most likely hear at my house.

When I was in fourth grade, I thought IF I get a pair of Levis, then the girls won’t be able to resist me.  And I got them.  Opened them on Christmas Eve.  I sat next to the Christmas tree with them lying in a folded up square in my lap.  The curved stitching on the back pocket, the orange label sewn into the pocket seam – it was beautiful.  The girls…I stared on thinking,… they will be mine.  But when I stood up and the legs unfolded like an accordion, they were bell bottoms.  No girls.  Bummer.  IF you get bell bottoms… then use them for play clothes.

When I was in seventh grade, I believed that IF I played football, then a ladies man would be born.  But my mother said, “You’re too small, and IF you play, then you WILL get squashed in front of all your friends.”  The if-then was now risky.  A new layer had been added.  It was now an if-then-WILL statement.  Things had stepped up, guaranteeing success or failure in a way I completely understood.  I didn’t like being unclear about things like “if” I got bad grades, “then” I might be grounded.  The if-then-will statement took things to a whole new level.  I was crystal clear when my friends said, “If you sing in the Northwood Junior High Honors Choir and perform ‘Steam Heat’ at the all-school pep assembly, then you WILL have no friends.  Like.  Ever.”  There was certainty.  I liked it.

Been thinking about the dad-wound lately.  My step dad did a real number (putting it mildly) on my family of origin.  I loved him then – because I didn’t know better, but now I do.  Do I love him now?  I’m supposed to if I’m a good Christian man.  One day I might.  We’ll see how it goes.  But if he hadn’t done what he did, then I fully realize my life would be different…way different.

I used to say real dumb things like, “I’m glad I had the life I had, because it made me stronger.”  Whatevs.  That’s what I used  to say, which is no different than saying “I wanted it to happen.”  And I didn’t.  It made zero sense but it’s how I assuaged my pain.

But when the abuse, the beatings, the lies, rape, control, manipulation, and brainwashing are all over, and your wounds are left opened and oozing, IF they are properly tended to, then you WILL find healing.  The conditional sentence.  “IF properly tended – WILL find healing.”  The main clause must line up with the dependent clause in a certain way for it to work.  I’ve tried other ways – they didn’t.  So it may seem like a bold statement, but IF it didn’t work for me, then it won’t for you.