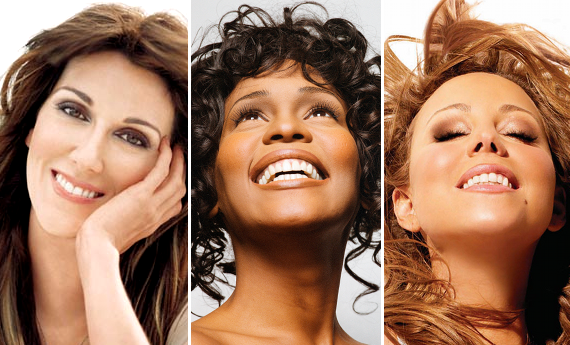 Diva singers like Mariah Carey, Whitney Houston, and Celine Dion are the best in the business. They’ve wowed us for decades with some of the most powerful love songs and songs of inspiration we’ve ever heard. In their most noted power ballads, we’ve heard the magical key changes that took their already unbelievable performance to a whole new level – their voices going to places few voices have ever gone.

But have you ever noticed that these superstars are rarely capable of generating, in a LIVE setting, the kind of perfection they’ve so often delivered in their recordings?

If you think about it, when songs like, I Will Always Love You or Hero, were recorded, Whitney and Mariah had an infinite number of opportunities in the studio to nail the big note that would end up sending shivers up our spines. (Think Celine Dion’s “All By Myself”…you know the note…. “anyMOOOOOOOOOOORE!!!” Yep. That one.) But then at the Grammy’s, when they had only one shot, they failed to deliver in a way that commenced the rending of the garments like their recordings always had.

To be fair, part of this is due to songwriting. Many of these types of songs are written in a vocal range that, while exciting in a recording, are nearly impossible for the artist to recreate live.

And this is all a part of what is called “studio magic.” The art of perfection. You simply cannot believe everything you hear.

Let’s take this a little further.

Many artists, when performing live, opt to sing their songs in a lower key. In the studio they can press the limits of their vocals because if their voice cracks, they press record and run it again. But singing a song live, in one take, requires the song to be…well…singable – even for the greats. So the key we’ve been listening to Because You Loved Me in for the last two decades, isn’t possible for Celine to sing over and over in a live setting…and as she’s gotten older, even less so. This doesn’t mean she’s not an incredible vocalist. She’s one of the best. But what we are hearing in the recorded version of that song isn’t really real. It was a one-time thing, singing the big note 50 times until it was perfect. And even then, they shined that note up, smoothed it out, compressed and tuned it to make it the most perfect note you’ve ever heard. Think Photoshop for your voice. That’s what is really happening.

However, while on tour, some artists keep those big popular songs that we all love in the same key they were recorded in, because that’s how we like it. Perfect. And our hearts can go on and on, right?

Because it isn’t uncommon for those REAL BIG NOTES in their live performances to be piped in from a pre-recorded vocal. Yep. It’s true. Remember that shined up, compressed, tuned version from the studio recording (aka, the perfect version)? Well, the sound engineers still have it, and when it comes to time to deliver the goods, that perfect note is faded in on a what is called a “fill track.” Fascinating, right? And Celine will still beat on her chest as if she’s working real hard for that note, but in reality, she could be on a smoke break and all would be well.

(For you nerds (like me) who LOVE stuff like this, check out THIS GUY’S YouTube channel. He’s not the most benevolent man, but he speaks the truth.)

Anyway, I suppose there are worse problems in the world, aren’t there? I mean, is it really that big of a deal?

I think it is. And here’s why.

We’ve bought into the idea (the lie, really) of perfection. And because we have, the hamster wheel is a’spinning and we’re all doing our best to get that ever-elusive perfect piece of cheese. We want it ALL and we want it to be flawless. We expect a shined up, perfect performance out of LIFE – the kind none of us are actually capable of. And this pursuit, this expectation is tiring, my friends. So tiring.

Maybe it’s time for a change.

If we are to live authentically, it’s very likely that we may need to lower the key of our lives until they are truly singable. If we are to live with a greater measure of internal peace, settling for less than picture-perfect in our work, family, fitness, friends, and faith, may NOT be us giving up or giving in. It may be us simply accepting those things WE CANNOT CHANGE.

Maybe it was easier to hit the metaphorical “high note” when we were at our absolute best – when we were so young and so strong and so beautiful. (I swear, if I see one more “hair system” commercial…) But we are changing, and always will be. So cancel that plastic surgery appointment. Because you don’t need bigger boobs. You need a bigger heart. A bigger mind. A bigger compassion. A bigger purpose.

I am sitting on a cruise ship at this very moment, watching Zumba. Caribbean jams are pumping throughout the pool deck and fifteen brave women have joined the Cruise Director to get in shape. Most of these ladies are of average build and age, 40’s, 50’s and 60’s, and are doing their dead level best to keep up. Two of the girls look to be about eighteen or twenty. Rail thin. Smiling like they’re in a Pepsodent commercial. They do not seem to need life in a lower key…for now.

The other ladies are sucking wind hard, likely wondering how all of this happened – the huffing and puffing, the jiggling of things that weren’t so gelatinous a decade earlier.

And that’s when I notice it. In the middle of the heap are a couple of forty-something moms with an ax to grind…with life it seems. They’ve got something to prove. They’re unwilling to lower the key and are trying for all they’re worth to be Whitney Houston in the recording studio – to be perfect. But the subtle lines from their Spanx, visible just beneath the surface of their spandex, tell a different story. They need life in a lower key. We all do.