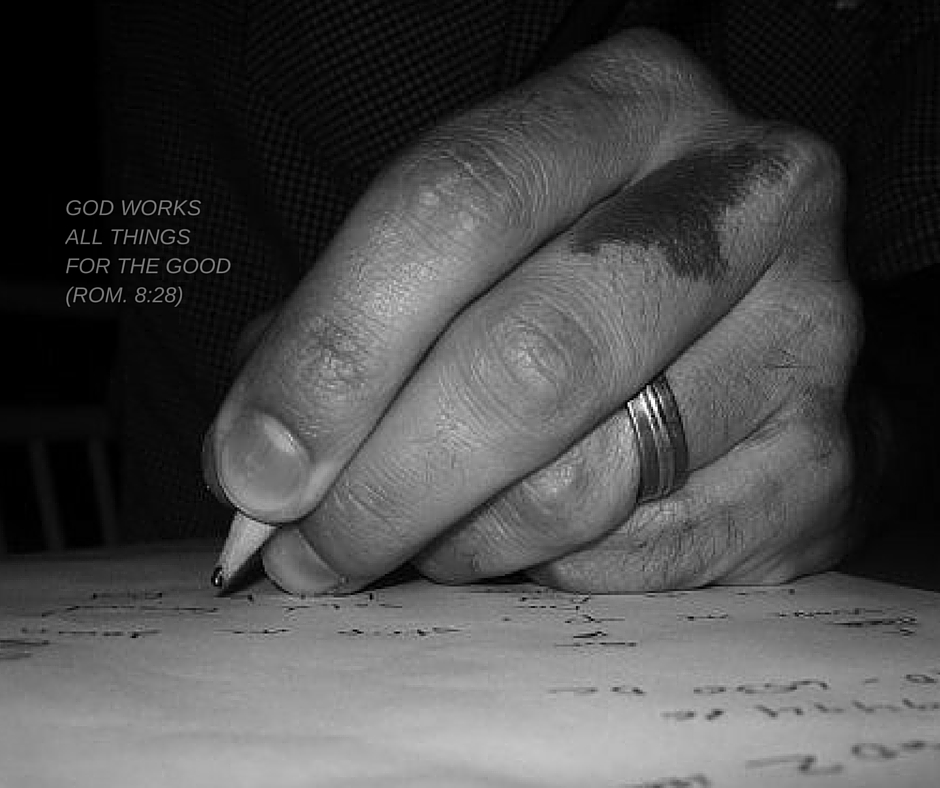 Less than a year ago my cyber-friend, Laura Parrott Perry, wrote a blog article called, “He Wrote it Down.” She sent it out into the world and watched as it exploded into something she could’ve never imagined.

I got the chance to meet Laura in person last week at the Storyline Conference in Chicago. Turns out, she’s as gracious as her writing. I wasn’t surprised.

At lunch five or six of us sat around talking about writing when Laura told us that her viral blog post had practically written itself. “I’ve never written anything so fast,” she said. “I woke up, opened my computer, and 20 minutes later it was finished.”

“So basically, God just had you taking notes,” I said.

Laura’s expression softened. “I’m telling you, that essay came from someplace else.”

This kind of clarity in writing is rare, so when it happens you feel wide-awake. Like there are a hundred Starbucks’ coffee shops in your heart and every artery, ventricle, vein, valve and platelet…every proton, neutron, and electron is walking around with its own personal cup of dark roast. And with this low hum of awareness, of PURPOSE, you’re not writing at all – you’re simply taking notes.

There is a scene from the movie “Simon Birch” where 12-year-old Simon (a very, very small boy) rescues children from a bus that has crashed into a lake.

“Did you see how they listened to me because of the way I looked?” he says after the rescue. Simon was convinced that the children paid attention to his escape instructions because he was odd looking. He also believed that because of his size, he was able to maneuver through the sinking bus and save every last child.

Throughout the movie, Simon claimed to be “God’s instrument.” And although it made his family and friends uncomfortable each time he said it, Simon believed it was true. Even his priest brushed him off because of his physical abnormalities – but deep inside, Simon knew God had a purpose for his life. So when the bus crashed into the lake, Simon was simply taking notes. He told the children who were stuck inside the bus what to do, and then began his rescue.

But don’t miss the fact that it was his brokenness; his abnormality and the acceptance of this burden that gave his life purpose. No one bigger could’ve rescued the children the way he did. “That window was just my size,” he told his friend. “Extra, extra small.” As it turned out, Simon Birch actually was God’s instrument.

And aren’t we all.

I once shared my story of sexual abuse with a group of men at a retreat and afterward was approached by a young guy who wanted to talk privately. We sat quiet for almost fifteen minutes. He stared at the floor. I stared at him. The tears flowed down his face. He looked sad, confused, and then overwhelmed as the scenes of his own abuse played over in his head. At first he tried to speak but the words had been pent up for too many years.

When he finished telling his story, he said he felt like a complete ruin – like he’d never be well. With great conviction I told him what I deeply believed the rest of his life could be like – that all he’d been through could absolutely become manageable and redirected for good.

When I have this kind of moment with someone, I don’t wonder for a second why I’m on this earth or what my greater purpose is. If someone is broken, I know they can recover. And that is all. I know what to do. I’m simply taking notes.

But finding our purpose takes prep work. It doesn’t “just happen”. We must become ready. Confession, going through the process of healing, and self-acceptance are all a part of that becoming.

There is beautiful verse from the book of Romans that says this: “And we know that in all things God works for the good of those who love him, who have been called according to his purpose.” (Rom 8:28)

…who have been called according to HIS purpose.

Our lives are not our own.

I’d have to agree with you.

We are called by something greater than ourselves – called to find our refrain in the song of redemption…to take notes. We are necessary and NEEDED in the world – to rescue those who are drowning all around us.

You were designed for a purpose. You are God’s instrument.

When Laura wrote her story of surviving sexual abuse, she had no idea that over 300,000 people would read her words, and that many of them would tell her their story of abuse for the very first time.

But Laura was ready. This wasn’t a fluke. She had a purpose.

This was the message she carried in her heart. So Laura woke up one day and wrote it down.

Because she was God’s instrument…

…so she took notes.