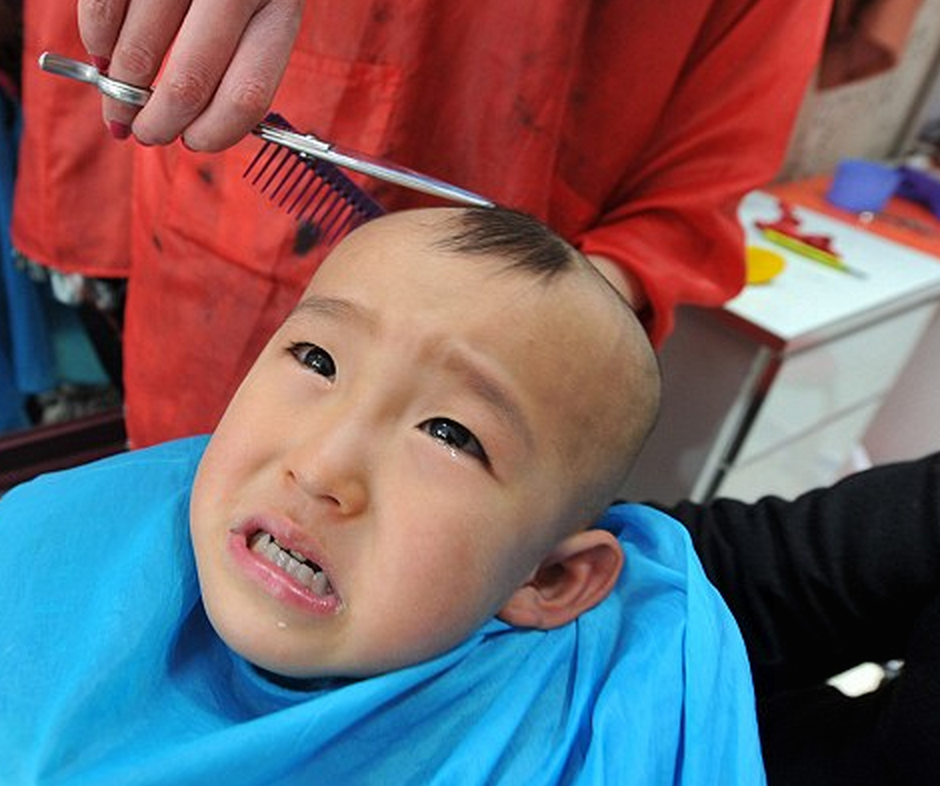 My mom cut my hair with a razor blade.

“Go get the razor blade out of your dad’s bathroom,” she’d tell me, and I’d head to the bathroom and begin my search for the sharpest one I could find. Most of them looked as if they’d been used to shave horses. Some were bent or broken. Others had rust on them.  But if it was good enough for step-dad’s face…it was good enough for our heads.

I haven’t seen that kind of razor in a hundred years. They were like something out of The Matrix. “Why hello, Mr. Anderson…time for a shave.”

At the end of the handle was a twist nob that opened the top of the razor. The silver rectangular razor blade was placed inside.  (Check it out HERE and HERE)

“God D*&%#,” I’d hear step-dad yelling, as the tiny looking snow shovel swept across his face. And when he emerged victoriously from the half-bath, there were no less than five pieces of ripped toilet paper hanging off his face, each garnished with a red dot of blood…battle scars.

To him, shaving was an event, which included a stack of towels, running water, Oldies blaring from the small wood-like clock radio on the counter, and plenty of steam. He was very serious about his shave. But then he was Italian…and as the Italians say, “If food is the body of good living, shaving is its soul”…or something like that.

After retrieving the sharpest razor blade I could find, I made my way back to the family room, where newspaper had been laid out to keep our hair from getting into the 1970’s green sculpted shag carpet. “The boys” would kneel down before the beautician (thunderbolt pose) while she grabbed a handful of hair and raked the razor blade in a downward motion…rake, rake, rake…until a clump landed on the floor.

She called it “layering.”

Her face was serious during haircuts…she was always in a zone. Her eyes darted around our heads as if we’d soon be on display in the Smithsonian with her name chiseled into a nameplate beneath us.

“That’s enough,” she’d say, whenever we uttered  grievances like, “None of my friend’s moms cut their hair.” Or, “Oooooowwww!”

The razor blade haircut wasn’t overwhelmingly painful, but after a half hour of tearing and whatnot, it became uncomfortable the way getting a tattoo can eventually make you want to crawl right out of your skin.

There was a sigh of relief when she finally picked up her scissors (that had apparently also shaved horses) and said these beautiful words:

Which meant one thing.

Maybe it was because she held her head a little crooked while cutting, perhaps the way Michelangelo had while accessing his work…but our bangs…

A little crooked was acceptable (I have pictures to prove it) But if they were too crooked, foreheads were in season.

I’d watch her head shift from side to side as my bangs crawled further up my face. And whenever I heard a “hmmmm…” and saw that self-deprecating head shake of disapproval, I knew what she was thinking.

I know I can do better.  Let me try that again.

…which meant I’d be walking around for the next two weeks with a massive clearing she’d created on my forehead.

But I understand her. I’m a lot like her.

Two weeks ago my wife, Heather and I were laughing about something, when she began staring deeply at my face.

“You look exactly like your mom.” And I knew it was true.  Even when I’m cleaning, there are times I get so focused on scrubbing something down, I can actually feel that hyper-focused look on my face…the same one my mom had everytime she was evaluating my bangs.

It’s the look of tenacity.  The look of “I don’t even know how to stop what I’m doing right now…because stopping is not in my DNA.”

Tenacity. She gave it to me. And I love it. Wouldn’t trade it for the world.

There are many problems that came out of my family of origin…things that broke me and worked me over. But then there are other things that have so beautifully balanced the broken parts…giving me exactly what is needed to tip the scales toward healing, love, self-care, and success.

Brokenness is not about staying victimized forever. But it’s also not about turning a blind eye and pretending that something powerful or life altering didn’t matter. It mattered. The hurts of our past always matter. Their venom seeped into us like liquid lies and killed the parts we’ve been trying to revive for decades.

But there is something else in there too…within all of us. Maybe it’s not tenacity. Maybe it’s sheer survival. Maybe hope, faith, or love. Maybe stubbornness that will not give up. Maybe it is the voice of brutal honesty that is the only thing that can tell the truth to the lies you’ve bought into…that “you’re not enough…you’re too much…you’ll never make it…you’re worthless…you don’t matter…you’re just fat and that’s pretty much it…you’re marriage will always be unfulfilling…people don’t change and neither do you…God isn’t real…you really are on your own. Just. Give. Up.”

I’ve felt it all before. I woke up this rainy morning and heard the voices again. But when I got in my car and headed to work, I became exceedingly aware that what I was hearing were old tapes. I had a choice to make. And so in the abusive silence of that car, I did the right thing.

I turned on the radio.

And heard a song I have rolled my eyes at for years. Here’s what it said:

I’ll be there for you, when the rain starts to pour

I’ll be there for you, like I’ve been there before

“I know, I know…hearing ya loud and clear,” I told myself.

I definitely have some power…more than I thought. Tenacity at work, thanks to the beautician.

So I’m letting this antidote – this remedy that says I am not alone, seep into me like liquid love and neutralize the venom within.

I’m donning my mom’s hyper-focused face. I’m cocking my head from side to side, and I’m getting ready to put something beautifully broken on display in the Smithsonian of my soul.