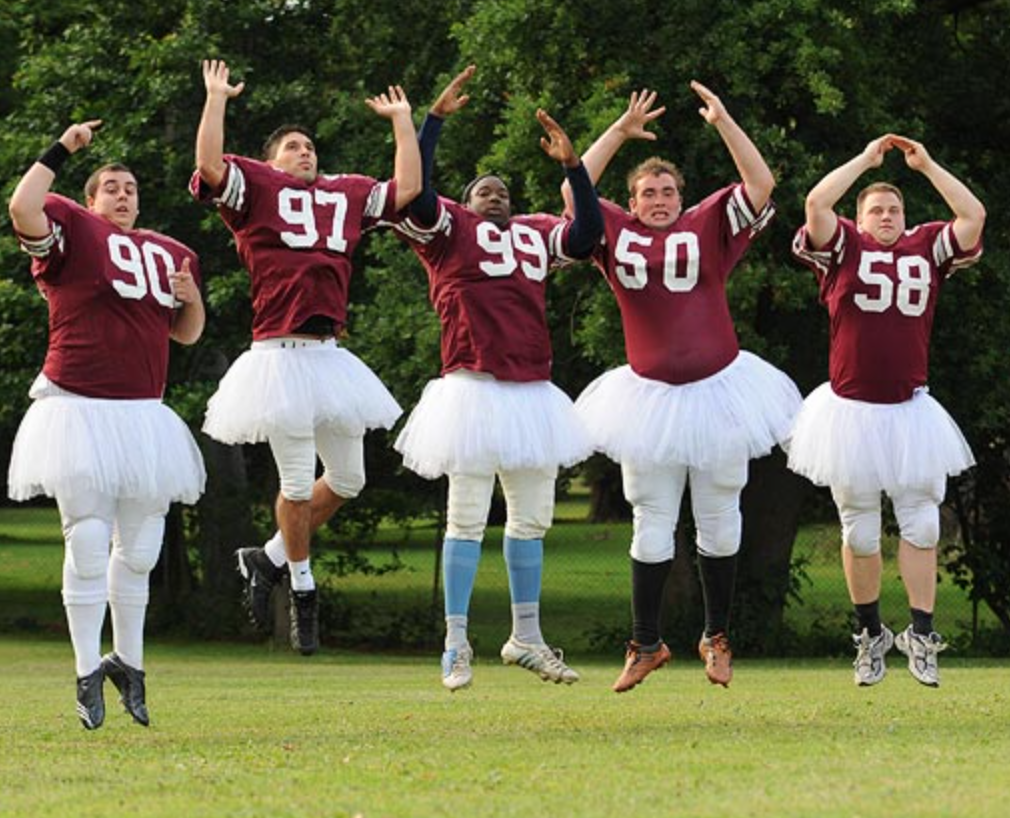 My wife is a musician by trade. A singer. Last week she sang the National Anthem at the Indiana Pacers game. (Check that sweetness out HERE.) I say “Pacers” now, but kept saying “Pistons” while I was at the game because I’m not a sport’s fan and sometimes I forget. I was a sports fan back when Terry Bradshaw and Roger Staubach were still in the game…but that was football, wasn’t it? See what I mean?

This lack of sporting knowledge and know-how is not something I’m embarrassed by. I don’t try to act like I know things around men who expect a man to know things. Sure, if a manly-man won’t let up about a player I know nothing about, I might say, “Oh yeah, that guy. Yes, he’s a veeeeery strong young man.” But then I’m given the sideways glance – the What did he just say? face, and I’m inclined to take it a step further.

“But How ‘bout those Los Angeles Antlers?” I say, and scrape the floor with my hoof. Still nothing. No camaraderie. No bro-date for mani-pedis.

Maybe it’s the skinny jeans. Or maybe it’s all the hugging I expect when the Antlers’ play with the kind of beauty Patti LuPone gave us while singing, “Don’t Cry For Me Argentina.” I’m really not sure.

I’m not, nor have I ever been, the hunting, fishing, wheat threshing, dart throwing, Urban Cowboy watching kind of burly-man.

I’m good with it.

So deal with it.

What most people wouldn’t know is that once upon a time I was a decent athlete.

When I was growing up, while I didn’t play football in school, I did play backyard football with Bart Kias and Jeff Saxton. Sans pads. Sans helmets. Sans sense. And as Wide-Receiver of my two-man team, I rarely missed a pass. How? I simply pretended my brother was throwing me a bottle of Bleu cologne, by Chanel.

I kid, I kid. I pretended it was tickets to the Ice Capades.

I was also a good swimmer, diver, was decent at track and was a great wrestler.

When it came to wrestling, I was probably more excited about the attire than I was about the actual wrestling. (Tiger had the sweetest wrestling shoes.) But it turned out that I was a good little wrestler. I was wiry and strong and was one of the few, if not the only one on our team, who was never pinned in a meet. My record? 13 and 3.

But those shoes though.

A few months back, my friend, Nate Pyle, released a book called, “Man Enough.” Nate’s book is a needed message about redefining manhood as we understand it. He talks about what this really means; that you don’t have to eat gravel to be a real man. Or have gobs of untreated nose hair.

You can enjoy a show tune or two.

You can cheer for the Los Angeles Antlers.

Nate mentions the words “men” and “ballet” in the same sentence…

“We need the strong and the quiet, the decisive leader and the poet, the scientist and the painter – all of them encouraging the other to move toward becoming the most human man they can be.” –Nate Pyle, Man Enough

“Not everyone is broken,” someone once told me.

I mean, let’s be honest. Life is hard and things happen, and we hurt, and we don’t know how not to hurt. And so we do our best. But our best doesn’t always work out, and we get ourselves into trouble, and we lie, cheat, steal, drink, drug, check-out, control, stuff ourselves with food, spend, avoid, pretend, deny, and the list goes on.

And while we may not all hold the same beliefs, to me, our brokenness is why Jesus came. It’s what Christmas is all about – saving your sorry butt and mine.

Because my friends, we ARE all broken. And it’s going to be okay. Because there is hope. There are do-overs and start-overs, and come January (or even tomorrow) we get to try again. And thank God we do. We get to admit our faults and in the process become more human…become the MOST human people we can be.

This idea of humanness unites us – this idea brokenness brings us together. So rather than act like we’re people with no problems, we can lift up our shirts or pull up a pant leg and show each other our scars – a beautiful reminder that we are not alone.

I spent years feeling like a fraud of a boy and then a fraud of a man because of the abuse I suffered, because of hard-wiring, because I was compassionate and liked watching ice skating. It seems silly to me now, but there was a time when the lies about who I was (or who I should have been) had me for lunch every single day. But the lies are so much quieter these days, and even when they do speak, rarely do they get a word in before the Prince of Peace whispers into my spirit, balancing them out with the truth.

We are what we are. And we are going to be okay. “A bunch of ragamuffins,” Brennan Manning would say. A motley crew.

But we are human. And we are real.

Peace, love and all the best to you this season.