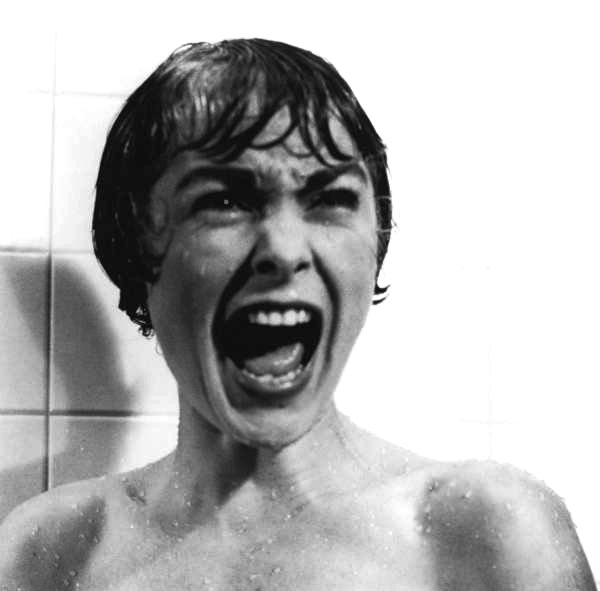 Last summer I decided it was it was time for my girls to see a good old fashioned scary movie. I saw my first scary movie when I was 10, the original Friday the 13th, where Kevin Bacon gets murdered in his bed while smoking his clichéd last cigarette, by having an arrow shoved up through his throat right after he notices a drop of blood on his forehead from the dead person in the bunk above him. Ah yes, I remember it well. So last summer, when the girls were 11 and 13 and most of their friends were telling them stories about movies like “Paranormal Activity” and “The Possession,” I decided it was time. But I wanted to be in control of what they saw for their first all-out horror flick, so I went to Blockbuster Video and rented…wait for it…CUJO. I know. It’s a dog. That’s why I wrote it in all caps – for a little extra impact. But something about dog attacks felt safe to me. It was natural. One might actually be eaten by a dog while locked up in a car that had run out of gas on a farm where a man-eating Saint Bernard that had gotten rabies from being bit on the nose by a fruit bat just so happened to live. It could happen.

So we watched it. They weren’t fans. They did get a little stressed out when the kid from “Who’s the Boss” was dehydrated and the mom from “E.T.” had to somehow get him inside the abandoned house without getting herself mauled in Technicolor, but overall, they weren’t impressed. So I went back to the movie store the same day and rented “The Sixth Sense.” M. Night Shyamalan. Long story short, it had monsters and a cute little kid, we saw dead people – they loved it. Throw in the surprise ending where you find out that John McClane was dead the entire movie AND WE DIDN’T EVEN KNOW IT, and friends, you’ve got a blockbuster on your hands.

Nothing happened in “The Sixth Sense” that kept them from sleeping for weeks on end. It was safe horror. Sophisticated gore. We were still be able to jump out from behind doors and scare each other in good fun, but M. Night flicks would not be sending them to therapy when they were all grown up. So we moved on to other M. Night movies stopping just shy of “Lady in the Water” because, ya know – mermaids are only scary NEVER.

So this past Friday afternoon – what to do…what to do? We read some reviews of “The Conjuring” which is rated R. They’ve never been to a rated R movie. Somehow I feel good about that. We did a little research to check for nudity so we’d have a leg to stand on in Bad Parent Court should the movie turn out for the worst. There was none. Also very little language, and, as it turned out, almost zero in the blood and guts department. This movie was supposed to have received a PG-13 rating but didn’t solely because it was “…too scary to be rated PG-13.” Heather said, “Is it Double-You-Tee for us to take them to a rated R movie?” To which I replied, “Yes. But white trash parents are almost always the cool parents, so…”

Fifteen minutes later we were waiting in line for tickets.

The movie centered around a normal family (except that they had five little girls) that had moved into a house that was haunted. The dog died on day one. Birds flew into the sides of the house and broke their necks on day two. There was a tree out front that looked like it had grown from Satan’s garden. It was a haunted house movie. And it was working for me. Most of the movie focused on demons trying to possess people in the family, and well, Mom ends up being the one who gets possessed while trying to take a nap. So unfair. Five kids. Busy mom. Not a moment to herself, and she can’t even get a little nap in without having a demon throw-up in her mouth.

So earlier in the movie an exorcist couple come to their house, and while getting the grand tour, see a family photo with of the whole fam at the beach. In the photograph they all look terribly in love with each other. Mom goes on to tell the woman exorcist that the day the photo was taken was one of the best days of her life and that she will never forget it. The kids were happy, her husband was happy, she was happy. They were together and everything was as it should be.

So after the mom is possessed she decides to kill her kids, actually just two of them…she’ll still have three left so it’s not that sad. At the climax of the movie, she is in the crawl space of the house holding a pair of scissors to one of her daughter’s throats. She is battling this demon for possession of her own soul. The woman exorcist is begging her to remember the day at the beach, and as only movies can do, we begin to see the actual scene at the beach play out in real time. The blue sky, the white sand, and the love of this mother for her family, coupled with a great bed of music and flashing scenes from the present to the past, brought tears to my eyes. And while much of the theater had been laughing or jumping in fear, there was silence during this part. It was a beautifully crafted scene, and perhaps the most authentic moment of the entire movie. I didn’t see it coming.

Holy water, Latin scripture readings and crucifixes had all failed to deliver this woman from her possession. But love didn’t. Perhaps it’s true I thought to myself – that Love never fails.

The mother put the scissors down and threw up the demonic whatever it was that she had swallowed in her nap from hell. She was back to normal in no time.

Honestly, I could’ve watched the scene of her family on the beach over and over. And seeing this mother go to war internally when she had been completely overtaken by despair was powerful. I sat next to Ev in that theater and thought, I hope I never lose the fight in me. I will always be their daddy, and they will forever need me to show them that it is possible to get through whatever it is that needs gotten through.

Sometimes when things are the most inconvenient we find ourselves fighting for something worth fighting for. The rest of the time we end up fighting to get our coffee served up with extra foam, just like we’d ordered it, or fighting to get our money back for the blue jeans that didn’t wash up like we’d hoped they would. God help me. If you ask me, that’s the real horror movie – a life that’s absorbed in self-satisfaction to the point of losing sight of anything real, or significant, or…eternal.

I may not be demon possessed, but I can be pretty self-obsessed. Even when I try to do good things, I can easily get derailed, lose sight of the giving part, and find that I’m back at the center of my world before I even get started. I am not one for self-deprecation. I know how that works – it’s not a great motivator. I don’t think we should all go around hating ourselves. But I realize that my pride, lust, inability to self-reflect, addictions, materialism, laziness, workaholism, etc. are demons that need to be exorcised, and only love will do the trick. But it’s not going to happen on its own. It’s more complicated than that. Love will always be something I have to work for. And for those of us who have “Make sure you get it perfect” or “I’m a bad person” written in our DNA like genetic code, we may need to remove the phrase “I have to work for,” and replace it with something that doesn’t sabotage our efforts from the moment we try to live differently. Because if we are to defeat the demons, loving ourselves in spite of the shortcomings that we absolutely recognize are still in our souls, is essential. You can’t exorcise something bad from your spirit if you aren’t capable of replacing it with something good. Replacing it with love.

Love. The more we let in, the more we will find our demons on their knees at the water’s edge of our hearts, drinking from an ocean of grace – until there’s nothing left of them.